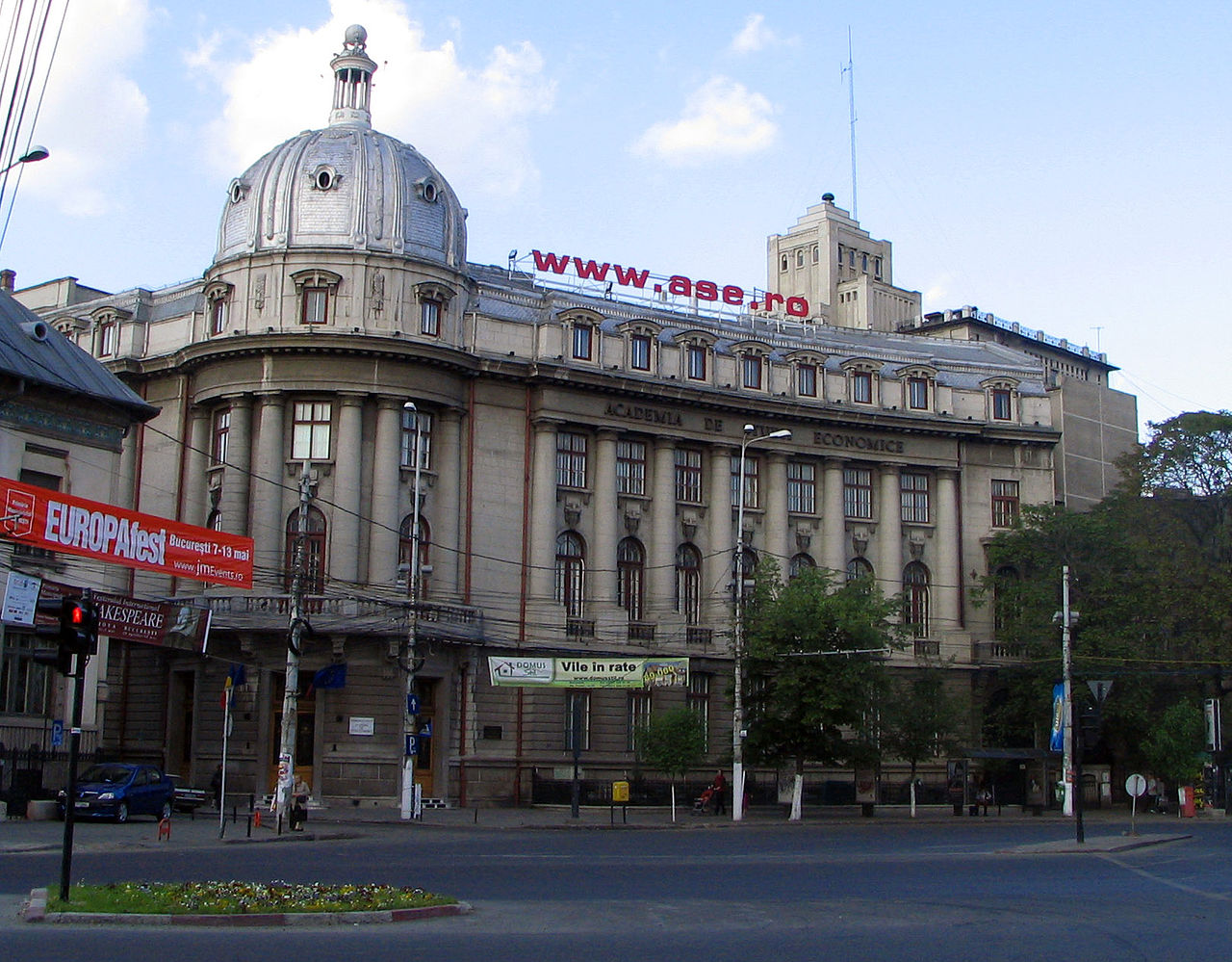 The Academy of Economic Studies (ASE) recently organized a series of events to mark a beautiful anniversary: 100 years from its establishment. In attendance were distinguished guests, from the Head of State to alumni, academics, professors, ministers, businessmen, and bankers. All in all representatives of generations of graduates and professors gathered together to show everyone that the ASE means something. Missing were students currently in attendance(!), perhaps a decision of the organizers in the tradition of U.S. universities who seem to disproportionately court alumni? (based on my son’s experience after attending Duke University)

The atmosphere was full of festive wishes (at anniversaries we only recount the happy stories!), recollections, touching stories, congratulations and diplomas, all nostalgic for „the good time we had back in the day”. Economistul (a local weekly) dedicated a special issue to commemorate the events and distributed some well edited leaflets. Kudos to them!

I was invited to one of the sessions, organized by the School of International Relations (formerly known as School of Foreign Trade), which I graduated and where I lectured for some time.  I was even invited to say a few words for the occasion, but in the end it didn’t pan out (local customs for event logistics don’t prioritize punctuality). But at least I listened to a few speeches, including some from representatives of foreign universities/colleges which did prove interesting. In lieu of giving that speech I’m sharing here what I would have said.

I was quite close to the university after graduation. I was a part time assistant professor, wrote several chapters of the Applied Foreign Trade course, and was a PhD candidate which I completed after the Revolution. Starting with 1994 I was a professor and I taught “International Financing” for a decade. I have the satisfaction that by introducing this course, the School of International Relations embraced a new specialty important for foreign trade: financial services. The curriculum fares well compared to the more specialized classes offered by the School of Finance. Over the years I lugged many suitcases of books bought in London, New York, or Paris for students. I used modern teaching methods in a time when professors still used to read the lectures sitting behind their desks. I worked with students at seminars and coordinated the preparation of many graduation thesis. I tried to do things differently, in a more diverse and modern way. My assistant (now a professor) even created our first website for the class.

While I was a top civil servant (1991- 1996) I tried to involve the ASE in the research programs financed by the European Union (I coordinated the first of the PHARE programs), to bring to the School of International Relations outside support (British Council, PHARE) to adjust the curriculum to modern requirements. I also invited visiting lecturers from European universities to share their experience about teaching methods, working with students, contents of the lectures, organization of the university departments, etc.

Many things have changed since then. The Academy is more open, more modern, better equipped. The library is grand, when you walk inside, you feel as you were in a cathedral, where you shouldn’t even whisper, but which invites to studying. State of the art digital equipment facilitates access to any source for research. The libraries are still enticing, despite living in the era of tablets and distance learning. The teaching probably changed a lot as well. Today, my modest projectors (first overhead with transparencies, later with a computer) would be outdated and the photocopied books I carried to classes and seminars would seem ludicrous.

I would have used all these resources to mark the great anniversary with debates and an analysis of the 100 years of history. How it initially started as the Academy of High Commercial and Industrial Studies, how it was “swallowed” and transformed and what it is now, anchored in a modern world. I would like us to talk about the moments of reference and inspiration, about great professors and their contribution to the making of the country’s destiny, but also about the deviations, the mistakes, and the failures. I wish that students and teachers, graduates and sympathizers, participated in a fair evaluation of the achievements of the economic education within the ASE and  create the institution’s profile for the future. What is the place and role of the ASE in today’s society? Is it an institution of the professors or of the students? Is it a partner in the social dialogue? Is it an institution that supports public policies?

After more than 20 years, Romania is still struggling to determine its economic and social development model. We lack understanding of the past, the needs of the present, and the directions of the future. We also lack the basics. One example is the school or university textbook; society is wasting precious time arguing about that content of textbook rather that demanding that our educational institutions rise to the occasion. Public debate should focus on the political viability of one development model or another, not on teaching what we are missing in school. I would like the ASE to fill in this void, to make sure that the students are left with sound and applicable specialized knowledge (the DOFIN – Doctoral School of Finance and Banking program is a good example) and to participate, as an institution, in shaping Romania’s development directions. The Academy could and should elaborate its own strategic view on Romania’s development, one that is credible, modern, well documented, sound, and last but not least, academic, significant.

Major topics of today’s life are not addressed scientifically: the financial crisis and the economic recession, the role of the financial institutions, Romania’s competitiveness, sustainable development, the convergence of the EU economies, adoption of the Euro, the future of the European institutions, etc. These topics should be approached not solely through the opinions of several well-known professors (including some with significant political positions), but in debates within the university departments and within scientific sessions. Doing that would affirm the university’s position much like Chicago University is known for its position on macroeconomics.

I wish that the ASE had its own notable periodical (a kind of local Harvard Business Review) where students, professors, alumni and sympathizers alike, could publish and debate research papers. We could discuss ideas, opinions, arguments, theories. More than a learning institutions, the ASE could be a school of economists (like the National Bank of Romania School), that leads the direction and view of Romanian economic research and doctrines (like the Romanian Academy does for the national language and other cultural heritage). ASE could be the pillar of the education-research-production cluster lying at the base of modern development (Porter’s diamond) in the strongest area of the country (Bucharest).

I wish that the ASE tried to become one of the most desirable universities of Economics. Romanians going to study abroad aim for the world’s top 100 universities. Why couldn’t the ASE be among the first 100 universities in the world? These are only a few of the ideas I would have shared with my colleagues and with the students at the 100th Anniversary. Other than that, we are all proud to have graduated from the ASE. Back then, we did not have much of a choice.