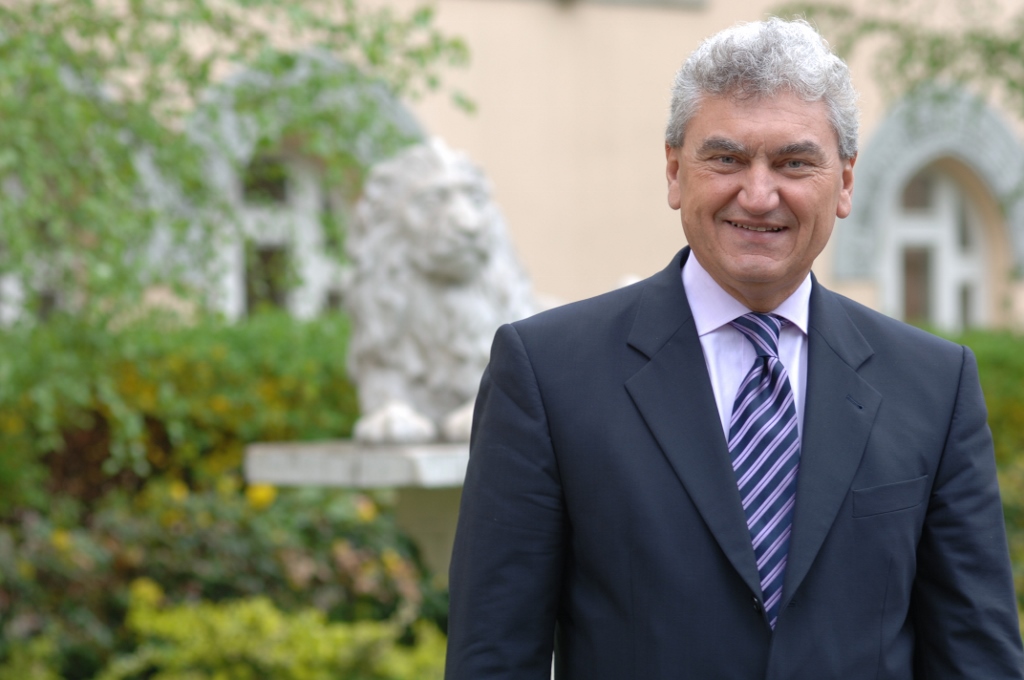 After a 17-year career at ING Bank Romania, six of which as General Manager (2006 – 2012), I took a new challenge: the rebuilding of the Financial Supervision Authority of Romania (similar to SEC in the U.S.), a public institution that combines prior regulatory bodies for insurance, capital markets, and pensions. I am familiar with the advisory activity – I used to be an advisor on economic, social and reform matters to the President of Romania (1993 – 1996) – and I feel comfortable as a “wise man” (a role worthy of my grey hair). Alongside my younger colleagues I enjoy contributing to the great success story of the bank which we built together.

I like to engage in dialogues with the bank’s clients, with the players on the market, with the authorities, with the media and with the public. Dialogue helps us learn, helps us put in our share of work for the institution, allows us to build and recognize values. We all contribute to increasing the welfare and prosperity of our country. We exchange ideas and share experience. Each of us lays bricks in the cornerstone of our society, contributing to its growth, however, each at our own pace, at a faster or slower rate. It is this experience sharing that I would like to contribute to through my blog. If I have something to say, maybe it’s worth it, maybe others can make use of my experience.

I was born on May 26th, 1950 in Dăbuleni, where those great watermelons grow! Since 1969 I lived in Bucharest, where I studied, built a career and started a family. I graduated from the Foreign Trade Section within the Academy of Economic Studies of Bucharest (1973) and then from the Law School within the University of Bucharest (1980) by distance learning. But my personal development did not stop here: I obtained my PhD degree in Economic Sciences at the Bucharest Academy of Economic Studies in 1995, and the thesis I presented was entitled “Foreign Investment and the Transition to the Market Economy” (which I also published the following year under the title “A Leap Forward”; it is worth reading, because it’s still current). I was also awarded the academic degree of Honorary Doctor of Science by the University of Hertdforshire (England), in 1993.

I began my career in 1973, working for a foreign trade enterprise, ILEXIM, which exported local industry products, metalwork, small furniture and handicraft articles. Five years later, I was transferred to the Economic Analysis Department within the Foreign Trade Ministry, where I “discovered” America, during several temporary missions as a commercial representative of Romania in New York (1982) and Los Angeles (1983 – 1985). I had the opportunity of being Romania’s Olympic attaché at the Summer Olympics held in Los Angeles.

In 1985, I was appointed acting director at ARPIMEX, a company that exported and imported leather and footwear (the former tannery factory Dâmboviţa). I was removed from office in November 1989, but then reinstated on 25 December 1989 by the “enterprise’s revolutionary committee”. My first victory in leadership…

In March 1990 I went to the United States, this time together with my family, as Chief of the Economic Section in New York of the Romanian Embassy. I wasn’t able to live the American dream and enjoy the values of the free world for too long: the Romanian Government assigned me to my first position as a dignitary in October 1990, as President (with rank of Secretary of State) of the Romanian Agency for the Promotion of Foreign Investment and Economic Assistance, reorganized in 1991 as the Romanian Agency for Development, a department under the direct supervision of the Government. It was my initiation in politics, but I also had the satisfaction of bringing to Romania the first foreign investors, large companies, such as Colgate Palmolive, Coca-Cola, Pepsi Cola etc., as well as the first non-repayable European funds (the Phare programs). I was the main liaison for the foreign companies that showed an interest in Romania and probably Romania’s most important promotion channel.

My political activity culminated with being co-opted in the Government in November 1992, as Minister of State (Deputy Prime Minister), President of the Council for Co-ordination, Strategy and Reform. The Nicolae Văcăroiu Government, an institute which, in theory, should have decided on the Cabinet’s government and reform program, in practice, didn’t even have its own budget… A truly interesting experience, with important programs (the “Government Program Strategy”, applicable, to a certain extent, to this day) and “negotiations” with the International Monetary Fund. But I was only able to hold the position for a little over 9 months. I quit the Government further to some differences of opinion with other politicians with regard to the objectives and the speed of adopting the IMF reforms (I was part of a government that was supported by the “red quadrilateral” coalition). It was probably too soon to discuss reform… In fact, even today this topic is in some respects “taboo”.

Starting from September 1st, 1994, I occupied the position of advisor to the President of Romania (with rank of minister) for economic and reform matters and coordinator of the Consultative Group for economic and social matters to the President of Romania, Ion Iliescu. My political career continued in the Parliament starting from November 1996, when I was elected member of the Chamber of Deputies for Dolj County in the 1996 – 2000 mandate, as a candidate from the Romanian Democratic and Social Party (PDSR). I was a member of the Commission for Economic Policy, Reform and Privatization. But… I quit the Parliament as well on May 5th, 1997. As I said on a different occasion, I was overwhelmed by the futility of my role as deputy: in the country, the people who elected me demanded jobs or complained about losing lawsuits, and being a member of the Parliament is very demotivating for an active person…

I gave up my political career for a position in the private sector, with ING Bank. I was probably one of the few examples of state officials who left the public administration to start from scratch a management career in the private sector (at the age of 47!). From 1997 and until present, I advanced, step by step, form a simple Market Transactions Manager to Deputy General Manager and General Manager, the leader of the bank. I contributed to a series of high-profile transactions, but also to the construction of the bank, as it is today.

I was always preoccupied with professional development and good quality education; for me and for those around me. I was always interested in finding new areas for improvement, but also in discovering intellectually inquiring and bold people. This is why, whenever I had the chance, I became involved in teaching; I was an associated university professor with the International Economic Relations Section within the Academy of Economic Studies of Bucharest for more than 10 years.

I am a conservative person when it comes to risk, I don’t speculate on the stock exchange, I don’t have businesses of my own. There was an attempt – more out of passion than anything else – with a small bee farm, Apicornu, in which I invested around $ 10,000; but closed it because there were no customers or perhaps I didn’t dedicate enough time to it. As in any activity, success comes after a lot of hard work.